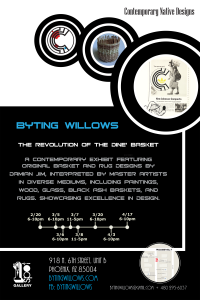 This Third Friday, February 20th, 6pm – 10pm, I will be opening up a new exhibit at 1Spot Gallery, Byting Willows: The Revolution of the Dine’ Basket. The entire project began when I met my girlfriend, Katja Lehmann, and I told her about my idea of publishing a catalogue of the 1,500+ designs I had created for Dine’ basket, rug, and jewelry makers in Southeastern Utah more than a decade ago. During our brainstorming sessions, she suggested that she would curate an exhibition of the best designs being interpreted by other master artists and include those pieces in the book as well. This little spark led to the Byting Willows show that will be presented during the months of March and April, and the pieces that these gifted artists have worked on will finally be revealed to all of Phoenix.

There’s something for everyone here, paintings, wood carvings, giclee prints, micaceous pots, black ash basketry, glass works, and a rug. There’s also a limited series of silk scarves, limited edition t-shirts for men and women, and earrings.  The entire plethora of work is breathtaking and I’m truly humbled that these artists agreed to work with us to produce this exhibit.

The official opening of the project is Thursday March 5th, from 6pm – 10pm, during which we will have our awesome friend Byron Fenix keeping the crowd moving.  As an added bonus, Warbird Press will have a vending machine set up offering printed goodies (bring your quarters).

That same weekend Art Detour will be in full swing, and due to scheduling conflicts 1Spot Gallery was not able to make the printed map, but we will be open on the 7th and 8th from 11am – 5pm for Art Detour devotees.  That same weekend will also mark Paint Phx’s 2nd annual celebration of all things aerosol.  1Spot Gallery will be participating by having world-famous artist, Randy Boogie Barton re-paint the front of the gallery.  And although we officially turned 2 years old in December, our awesome neighbor Andrew Pielage’s gallery the Drive-thru Gallery will be joining us in a public BBQ to mark both our gallery birthdays.  With so much awesomeness in 1 weekend, you “need” to come to Phoenix that weekend and partake in the festivities.